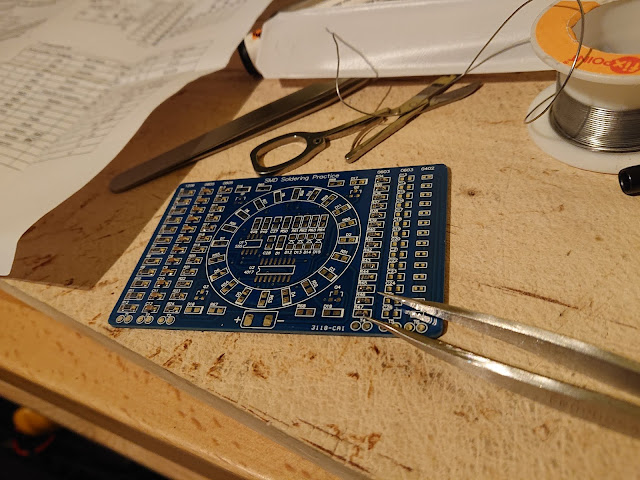 It's time to face the truth. Nobody uses good old through hole components for professional electronics designs nowadays. This of course means that there's less demand for components and more and more new components are only offered in surface mount form factor. Sooner or later hobbyists need to follow the trend and start using SMD components too.

I have been avoiding SMD projects without any good reason. I've seen how easily hardware designers at work solder all those tiny barely visible components but somehow thought it would be too difficult to be fun. And I don't want to waste my scarce free time doing something that I don't enjoy!

I have Mutable Instruments Clouds module in my eurorack and have always liked the open source approach they have. I have been aware that many people build their own DIY versions of those brilliant modules but have always skipped those projects because of the SMD soldering. After giving it some thought I figured out I might as well learn some new soldering skills and build one. I have built some really complex through hole projects and the traditional soldering really hasn't offered much challenge any more.

After reading this article I got really excited: https://medium.com/@rxseger/surface-mount-electronics-for-hobbyists-easier-than-you-think-fdd2dd60952b

It's about time to learn this valuable skill and build something different for a change!

To solder surface mount components you of course need a surface to mount the components to. I ended up ordering some Mutable Instruments clone PCB's from https://www.amazingsynth.com/. Amazing Synth also kindly offers a free SMD practice board for SMD newbies like me. It also turned out that there's lots of cheap practice PCBs available in Ebay. Some of them are dummy boards with no functionality but some have stuff like timer IC's and blinking leds. I ordered one of these more advanced boards: https://www.ebay.com/itm/SMD-Rotating-LED-SMD-Components-Soldering-Practice-Board-Skill-Training-Kit-DIY/192343157603

After my PCB order arrived I started practicing with the free practice board. It's a board without any real functionality. Luckily all resistors are connected in series so it's easy to check with a multi meter that all soldered resistors work.

I was surprised how easy it is. Of course my first attempts were really ugly and probably unreliable but in general it was much less difficult than I expected. Surface mount components come in various shapes and sizes and the bigger ones really aren't much of a challenge if you know how to use a soldering iron. 1206 and 0805 sizes are really easy. 0603 was the smallest component size on this board and it was a bit more challenging. The Mutable Instruments PCBs I ordered generally use 0603 sized resistors so my goal was to become fluent with those too.

I was worried that my cheap tools wouldn't be good enough for these smaller components but they turned out to be ok. I use a Weller whs40 soldering station and it seems to do the trick just fine for SMD soldering. I also had an old Stannol Mini-Fluxer flux pen I used for the IC's. I also tried it for soldering the resistors but didn't really notice much difference so decided not to wasted it for passive components. I use traditional leaded solder because I still have plenty around. 0.56mm seems to be a bit too thick for tiny smd components but after some practice I learned to apply it carefully enough not to flood the whole component in solder.

I had one of these https://www.amazon.com/ProsKit-MA-016-Personal-Headband-Magnifying/dp/B01ENBCE82 around and used it for checking the solder joints afterwards. I really don't like the headband so a regular magnifying glass or a loupe would work better for me. Luckily I have good eyesight and don't have much need for these optical tools... ...yet.

The only tool investment I had to make were a pair of proper tweezers. I tried with some generic tweezers I found from our kitchen but it was difficult to keep the smaller resistors firmly in place.

While ordering components for the first Mutable Instruments board I added some tweezers to the order. Mouser has loads of tool options so it was difficult to make decision and I ended up ordering 3 different tweezers. They are all from the cheap end of the spectrum costing only a few dollars. The most expensive pro tools can cost hundreds of dollars. I got straight sharp tweezers, curved tweezers and a bit different Xcelite cross lock tweezers. Cross lock means that you have to press to open the claws.

My second practice board from Ebay arrived and equipped with my new razor sharp tweezers I was ready for the second round. This board was much more fun as it also implemented some functionality. There's similar serial resistor areas on the sides as on the first practice board and then a 555-timer driven blinky led section in the middle. In addition to resistors there's also capacitors. Unfortunately testing capacitors with my multimeter wasn't easy so I lost interest soldering them. This board also had some super tiny 0402 components. Unfortunately they were capacitors so I don't know if my attempts were successful or not. They were too small for me anyway. I'll try them again after I've gained some experience with the bigger components.

After trying all 3 sets of tweezers I ended up using the straight sharp tweezers. With these it's easy to keep the components in place.

I managed to build the board without any issues so I guess I'm ready to start working on real SMD projects. First one will be Mutable Instruments Ripples clone. Let's see how that goes...

Here's a short video of the completed practice board in all it's glory: https://www.instagram.com/p/BwMds9llU8M/

Popular posts from this blog

March 26, 2017
Sunday Soldering: Akai Rhythm Wolf Drum Machine modifications Akai Rhythm wolf is a cheap analog drum machine. It has a nice old school lo-fi sound but unfortunately Akai left out some quite useful features from the standard setup. Today I decided to modify my unit to better suit my needs. Here are the added mods: Added a resistor to the outer legs of the 'Howl' pot to make the range more useful. By default it's pretty much a switch between clean and a completely destroyed signal. I used 33k. Probably even smaller value would do. Added 3.5mm individual output jacks for all drums. The PCB has nicely marked spots where the individual signals are available but it's actually easier to take them from the volume potentiometers directly. The middle leg gives the signal after the potentiometer so volume also affects the individual outputs. It might have been a better idea to take it before the pot so that it would be possible to silence the signal from the main
1 comment
Read more

March 06, 2021
Waldorf Blofeld is amazing little digital synth with almost endless possibilities. Unfortunately the rotary encoders seem to start skipping and failing sooner or later. After couple of years of light use my unit started failing too and it became very annoying to use.  First Try I first tried to open one encoder and clean it from inside. It worked ok but these components aren't really meant to be opened and closed again and I never managed to put it back together properly. Encoder shaft was loose and wobbly and it would have failed again soon because the encoder wasn't tightly closed. Proper Fix Luckily it's possible to fix it properly as long as you know how to solder. Current price for the full set of encoders is less than 7 euros. I ordered new Bourns encoders from Mouser: 1 pcs of  https://www.mouser.fi/ProductDetail/652-PEC16-4220FN0024  for the main encoder, this one has detents so it "clicks" when you turn it. 6 pcs of  https://www.mouser.fi/ProductDetail/65
Post a Comment
Read more

Waiter, there's an Arduino in my Eurorack!

June 07, 2017
I want to write code! Modular synths are traditionally all analog but nowadays there's plenty of digital modules available too. As I'm a software engineer I have been planning to add some home made digital signal processing to my modular synth. I already have an STM32f4 processor taking care of midi2cv and two digital outputs but additional modules that are open for custom software are always welcome. Cavisynth Ardurack PCB and panel I have been playing around with Arduino HW and got an idea to use it for eurorack module. Soon I stumbled upon  Cavisynth Ardurack Module  and realized others have got the same idea too! It's a simple eurorack module that uses the really popular Arduino embedded computing platform to do various things. It can be used for example as a square wave oscillator or a noise source. See Cavisynth website for full feature listing. The module is available as a cheap DIY pcb+panel kit and all software is open source so I had to order one immediat
Post a Comment
Read more

tvainio
Programming for a living, music for life. Plus some cycling!